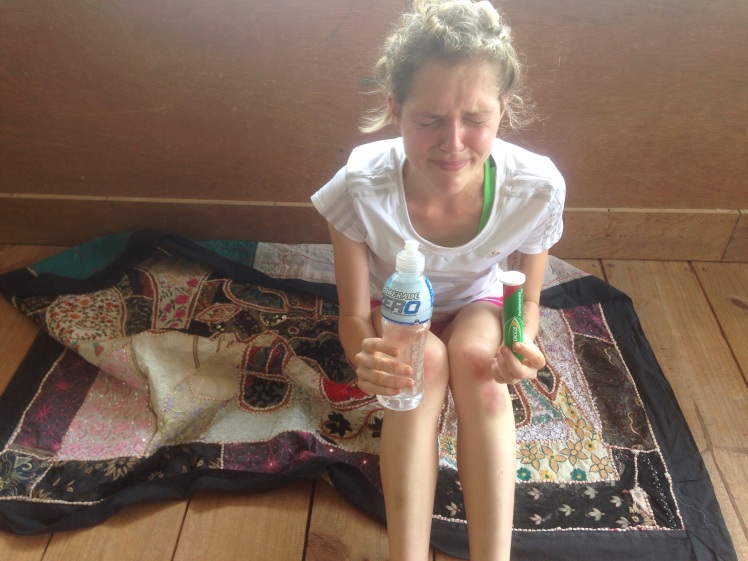 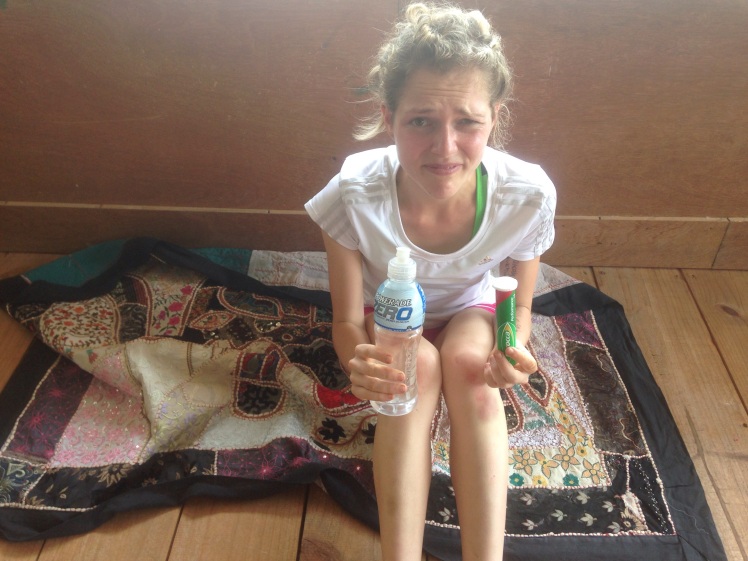 My body gave way on me as I knew it would. Everything went straight through my system. I’d been to the bathroom a good seven times before 9am. My knees knocked and my tarsals trembled.  My voice quavered and I made ridiculous jokes and leapt around being an idiot.

Yesterday Oce gave her class and I was so in awe and envious of her completely calm and chilled demeanour beforehand. “Aren’t you nervous?” I enquired.

She looked at me in confusion. “No. What’s there to be nervous about?”

Taking her class instilled a bit more self belief in me. She didn’t name the asanas in English, let alone Sanskrit, where I’ve been reciting them morning and night to get my pronounciation perfectly on point. She lost her way a few times and got muddled and everyone just smiled encouragingly until she found her focus again. It was a really relaxed atmosphere and I felt I could breathe again thinking about my own.

Last night I dreamt I was robbing a clothes store and suddenly the coppers were onto me; I had to decide my death, be it ingestion by a massive cobra, ripped to shreds by a ferocious tiger or a 100kg brick dropped on my head. I woke up thinking, “Thank fuck that was just a dream! What’s a class in comparison?”

I was all twangy again at breakfast. Tense. I wished I didn’t have to wait until 4.30; I wanted it was over and done with so I could be free. I felt like the apple I ate for breakfast was fixed in my throat. My breathing was shallow and stilted. I felt sick.

Crazy, or maybe not at all, ED fully reared his head. I was counting calories, feeling guilt and pushing myself to exercise more and more. Obviously such situations causing stress give rise to him taking a good grip. I’m trying to counteract but with my mind frame it’s proving punishing.

It takes me back to Mt Carmel, year 6, and a boy called Fraser McKay. Fraser was a brilliant mathematician; it was common knowledge he was top and his dexterity with digits was infamous. But poor Fraser. Every time we played Around the World he went and hid in the toilets because he couldn’t deal with losing in a basic facts race. At the end of the school year he tried to smuggle home the maths textbook because he hadn’t completed all the problems. At the time I laughed and mocked him with everyone else, but now I ultimately understand and my heart goes out to him.

I was pretty fast at sprinting as a wee lass and would get to go to the inter school athletics each year. I used go run my heats and qualify for the next round, then before the finals I’d work myself up into such a state that I remember one time I vomited all over the tracks.

When I got to Baradene, I used to run the 100m heats and make the finals, but talk myself into an injury before so I didn’t have to partake. I never would’ve come first; Lara, Jessica and Clare would always bags the gold, silver and bronze, but a 4th or 5th was doable. But I just couldn’t bring myself to risk failing and not doing the uttermost best I could.

Same in rowing; at gym trainings there would be the standard runs and exercises to undertake. I remember one time I bet Clare Hollywand and from then on it was a necessity that I did everytime. And when I didn’t I felt so incompetent.

I’ve come to realise that although I love learning and showing off, testing or competing situations just don’t sit well with me. University is a case in point; I was on edge every day and night throughout the semester, unless I had a wine in me. Come exam time I was an absolute nightmare to be around; I feel for my family and my second “parents” the Moloneys. It makes me so sad that I spent so much time berating myself and being in self doubt.

Back to the present: before my class I went up to the yoga studio and ran through the sequence over and over. Oce and Eva gave me some tips: “Information overload! You know too much”, “Stop pacing, we can tell you’re nervous”, “SLOW DOWN”. It really aided me and I took their comments on board (see what I mean about my defensiveness slowly lessening?).

I also took up my elephant tapestry, my empty Berrocca tube and my scungy Powerade Zero bottle Deb got me at the airport. I made a wee display around my mat; absurd, ridiculous, plain silly – but they calmed me beyond belief. I got my drink bottle of holy water from the Ganges River (meant to have positive energy and healing qualities; hell, I’ll try anything)  and sprinkled a shower over myself, then sprayed a significant round of Rescue Remedy in my mouth. Then I wrote the most significant sayings I wanted to use on my arm, and after my last read through of my extensive notes I put them away and went and chilled out with everyone.

One more run through an hour before. I was serenely calm, no butterflies at all (except in the badhakonasana butterfly asana I included of course). (Though lack of nerves could be due to half the bottle of Rescue Remedy swigged down beforehand).

Not fantastically, sensationally incredible as I would’ve preferred, but it was good. The sequence followed a logical flow, there were minimal mistakes in mispronunciations, I had no forgetful fades and I even injected a few jokes in which got some giggles.

Unfortunately all my careful arm phrasing was rendered irrelevant; the sweat cascading down my arms made it illegible as it rubbed off on my t-shirt. But I remembered each of them in turn anyway, as I should’ve known I would, and managed to weave them in  in a way which came across as completely spontaneous and natural. Jahoo!

During the class there was a clasp of the toes called the “Yogi Bite”. In one of the final asanas of the sequence I told the class to do the move I suddenly realised the name’s similarity to “Yowie”; all I could envision was the coloured, tin-foiled chocolate treats. I honestly convulsed with chuckles and had to recollect myself. I couldn’t even explain what was so funny but all were amused by my obvious ticklement.

And then it was over.

I got a big smile and a, “That was very, very good Yogi Pop,” from Rajeesh which made me feel fantastic.

I had expected a colossal swell of elation on conclusion of the class, like when I stepped out of my final exam at Uni. But all I felt was a mere sense of relief. I was a bit gutted with the lack of joy, but then five of us went down to the river (next post) and oh yup, there it was: jubilation.

How I was feeling before the class had me obdurate that I would do all in my power to shun such situations again. But then I thought about it; why avoid instances and miss out on life in the process?

So now I’m going to plod Pop in positions that are uncomfortable and unsteady. I’m going to embrace, thwart and overcome anxiety and sign up to study and get tested, run and get placed and be exposed to presentation situations that require preparation.
Anxiety is interlocked and the best friend of ED. They can both fuck right off.