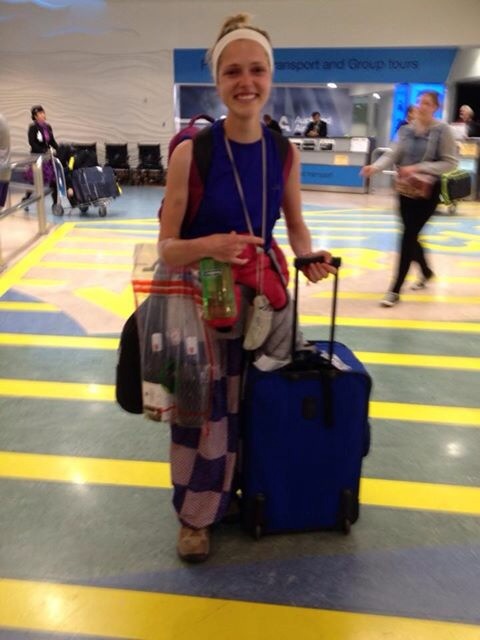 On my way to India I flew Singapore Airlines and absolutely adored my experience. Steaming hot flanneteles dispersed to freshen the face on take off and landing, air circulation socks for wearing in flight, inputs for charging devices next to your spotless screen. I was pumped to do to the ten hour trip from Singapore to NZ back in the arms of SA once again.

So I was a tad peeved to find that being a Star Alliance flight, it was going to be Air New Zealand operated instead.

Don’t get me wrong, I love Air NZ; I’ve never had an unpleasant experience with the airline either domestically or internationally. But I’d been looking forward to being fawned over by the little Singaporean beauties in their saris.

When I first got to the lounge for my stopover, I came across a Hawke’s Bay couple setting off to the UK for the Rugby World Cup. I cannot express my joy at hearing the Kiwi accent and its dinsrinctive twang. We yarned for a fair awhile (about how great our country is mostly). It was just so refreshing and familiar. It set in the sensation that I was going home.

When I got to my gate my eyes truly filled with tears as I saw Kiwis all over the place (people, not the actual endangered bird; though I’m sure you got that). Only having come across one the whole time I was on my trip (once again, person not bird – though she was a female) it felt amazing to suddenly be surrounded by a good hundred or so. I must’ve looked like a right tosspot, sitting there beaming like a loon.

When I saw the familiar fuschia uniforms of the hostesses I got a lump in my throat. I was going back to the best place on earth. I rejoiced in being on an Air New Zealand flight and bounded on board.

I was placed next to two German lads heading to NZ for their OE and took great delight in watching their expressions as the new All Black Men in black safety vid played. I couldn’t get over on how one looked exactly like Henio as a young Dutch boy. I took a sneaky pic as he slumbered, marvelling at the resemblance. Then another as he arose. He didn’t mind; I’d written his CV and cover letter for him during the flight so I probably could’ve taken a reel if I’d felt the need.

After a ten hour haul of numerous naps, failed attempts to sit through movies and p/d writing (this will be revealed as to what it is in a few days) we landed with a bump in Auckland.

I disembarked with haste, pretty much sprinted to the carousel (had to wait an absolute age for my bloody suitcase), blitzed customs and strode out the exit with the biggest grin on my face.

There were Deb and Hank, waiting with grins to mirror mine.

One thought on “Feeling: HOMELY”