Mate, I’m au-dela de pompage (beyond pumped). (Apologies for the lack of diacritical marks or more commonly knowingly termed “accents”; I can’t find them on my cellular device. Once I get onto to uploading from my lappy, I shall attempt to include them as per they should be).

Can I just say that clearing customs at Charles de Gaulle Airport was the easiest process I have ever experienced? I thought the Chinese was a breeze. Here I literally got off the plane, waited in an extremely short line to get my passport stamped (slipped in a “merci” there), lugged my bag off carousel onto a trolley (impressive, same breaking bar, but not holding the same bond as with my Chinese one) and literally walked round a corner and into the Parisian world.

(Well, not entirely: I’m still at the airport. My gal pal Jess I’m meeting to hang with for the next few days doesn’t reach Paris until 11.15 on her train from Amsterdam, and I’m taking advantage of a claimed charging station and the free – and extremely fast – wifi, so as yet have not actually forayed into France).

Landing at 6.40am the sun was just beginning to rise, eliciting a red hue across the skyline. My new Taiwanese French friend Jacqueline (Dustbin Baby, Bad Girls, The Bed and Breakfast Star; sorry, it can’t be helped) rose me from my daze (noting down insights in my Harry Potter notebook) to watch with her. Unfortunately, being located right on the wing (our seats being in line with it I mean, we weren’t actually perched on the wing ourselves), much of the view was obstructed. But the pearls of lights I could see laced around the land were enthralling and – apologies for this horrid cliche of a term – my heart skipped a beat.

Paris! Europe! I’m actually here! I don’t think it sunk in until the moment the plane hit the runway (well, wheels of the plane, not the body of the aircraft itself). What with the ruckus and uncertainty of this trip coming about, it didn’t feel real until now. But now I’m here, it’s happening, and I’m all eager and peppy.

First thing I thought was pretty gosh darn fab: the airport was lit up in the colours of the French flag. Jacqueline informed me she thinks this is a recent innovation since the terrorist attacks late last year, as she had not seen it before. It made me wonder about the current status on the changing of the NZ one and I mentally noted to log in to the Herald app and see where it’s standing (as yet, still have not. Probably won’t. Can someone inform me what goes down?). 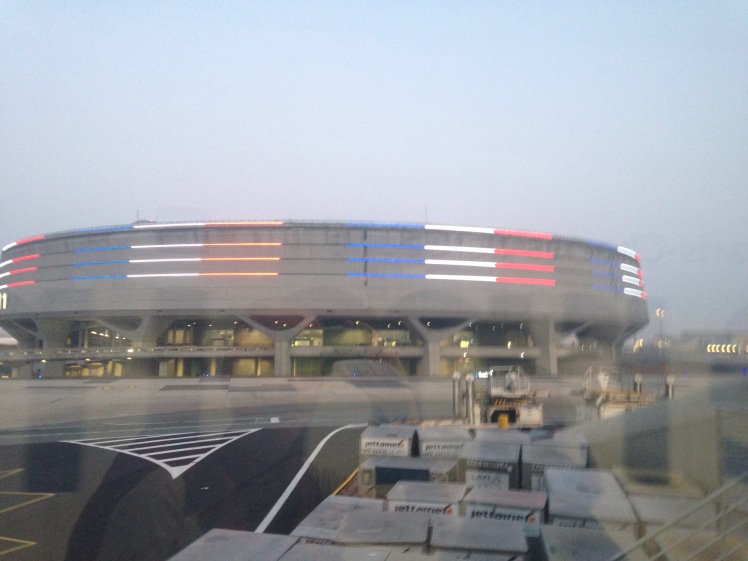 Before I came over I was asked if I was scared to go to Paris after the terrorism that had taken place a mere few months before. Quite honestly? No. I’m not at all. It’s like going to Nepal just after the earthquake, with lots of people really taken aback I was still following through with my trek. If you let fear stop you from going places, you’ll never go anyway. Yes, many did die in the city centre here, but that could happen anywhere. In fact, what with the amped up security, it’s probably less likely to occur here than in a number of other “safe” spots. Unfortunately it’s part of the fragmented and largely fucked up world we live in today – but staying home to avoid the very low chance of being in the wrong place at the wrong time will do nothing bar make you miss out on life.

I love listening to the French language. The words sound like a little melody, with lots of oomph poured into each pronunciation. I found myself yearning for the skill set to actually be fluent in French myself as I roamed about searching for a free power point, humming the “Lundi, Mardi, Mecredi” song under my breath (cheers Mrs Amodio and third form French). But I can utter a few phrases: I can say my name, tell someone I’m “very good thanks”, do the basic hello/goodbye/please/thank you, let people know I have two brothers, announce I am 13 years old (as I said, third form) and count up to 12. And for all else I have a sunny smile and my google translate app. Sorted.

The airport, I hear you ask? (Probably not actually, but as I love them and shall be at a fair few you’ll be hearing reviews on the lot). It’s very clean. Very clean. Currently in the process of renovations. Not as busy as I had anticipated – though I am in terminal one, which Jacqueline told me was the lesser busy of the two. There’s lots of very good looking French lads milling about. And there is a cafe cart just out of arrivals selling the most freshest, flakiest croissants you have ever seen.

It rather ironically funny; I’m such an insane planner with my daily doings in my diary and what not, but when it comes down to finding my way places I am such a winger. Before landing I did not even have the address of the hostel I am booked into stay at, let alone what metro line to catch to get there. I love that sense of just having a vague notion and going for it; it’s just carefree and unorganised, so unlike my usual neurotically rigid self.

A bit of a pointless post really; the excitement will come soon. I’m just going to camp out here for a wee while longer then don my bags and go training to the city centre. Picnic under the Eiffel Tower tonight with a bottle of red wine? (With Jess, not on my lonesome. Not that there’s anything wrong with being a Nigel) Don’t mind if I do. Be ready for a barricade of somewhat useless yet riveting fun facts – I have a trucketload listed to lace through my posts to come.