Feeling: I’M IN THE CLEAR RUNNING 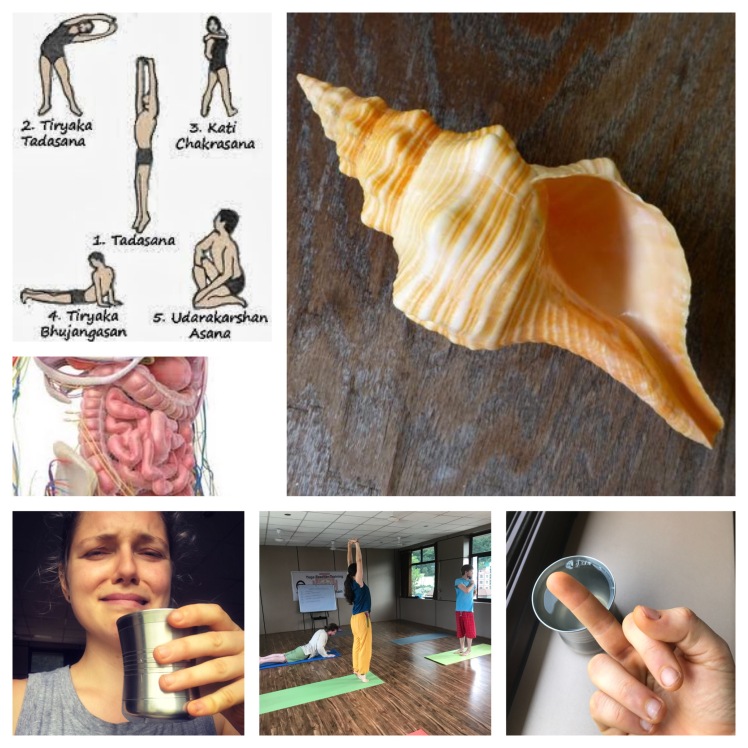 Before I spiel on, a disclaimer; I’m not one to discuss bodily functions with anyone aside from a few special someones – two of my best friends, Aroha and Stacey. To speak so candidly here is a sure sign of how this morning has liberated my mouth around my bowels (in a figurative sense, not a literal; it may have been somewhat internal but there was none of that).

And so we begin.

In traditional Hatha yoga, one of the limbs to live by is that of shatkarma (oh, what a fitting name). This loosely (again, so many connotations) translates to “six processes” or “six actions”, whereby the body is cleansed and purified in order to attain physical and mental purification and balance. You see, washing the outside of the body is easy – some soap and you’re alway. The inner is more intractable – but luckily (or is that, unfortunately?) some sages and yogis way back developed some scientific systems to suss this out. You see, constipation does not just occur in your bowels – it can be also in your mind, your thoughts and your energy as well.

As mentioned there are six separate shatkarma: neti (nasal cleansing), dhauti (cleaning the digestive tract), nauli (abdominal massage), basti (colon cleansing), kapalbhati (purification and vitalisation of the frontal lobes) and trataka (blinkless gazing). Every morning since the get go here we have been clearing out our sinus mucus with some little plastic watering can pots (jala neti), followed by some kapalbhati (also known as the “breath of fire”) before asana.

And today was scheduled for some shankh prakshalna.

What, I hear you question? Well, SP is a process whereby the the intestinal tract is cleaned by the ingestion of salt infused h20 followed by the performance of certain asanas to remove impurities from your system.

Pretty much, you drink a fuckton of water and shit out all the crap in you.
“Shankh” means conch shell, which represents the alimentary gland from mouth to anus (two openings with water flowing through). So in essence, the practice is a conch flush (that sounds like insane innuendo, but it’s not) (unless you’re into that sort of thing, I guess). You drink two glasses of salt and lemon water, do a series of asanas (a stretch up, a stretch side to side, a twist, a cobra twist, and some knee to floor twist thing) and then repeat as many times as necessary to set the bowels in motion. Then you continue until your nether end runs clear. Only to do so once every six months, your small intestine is squeaky clean and all nasties are – literally – flushed away.
So this morning we all arose for our 6.30am start (even poor Danish Marie, who had her own non-opt-in digestive cleanse going on all night; she was sent back to bed under the instruction not to be involved). All week the teachers have been repeating, “Don’t see the process, see the benefit”, which set me up to think it may not be the most enjoyable of ordeals.

The process would tie us up all morning, we were told (or not, as it soon so happened). The night before we had been fed a meal of kitchari (an Ayurvedic detox food, that being a simple blend of rice, lentils and vegetables), an easily digestible dish that meant our systems should be good to go.

And it began.
The first two glasses of salt and lemon infused water. And big buggers they were too – Manoj didn’t go easy on the pours. “Drink them quickly,” he instructed. “It works much better when you do.” So I took a deep breath and chugged them down in one. (“How grateful are you for all those years of preloading before the Stables?” I asked Beaver. “They’ve really set us in good stead for this.” “I guess it’s like a tequila shot,” he said. “The lemon and the salt; just not the tequila.”).

Then it was to the asanas, each one to be executed eight times before the next lot of h20 was to be intaken. And then asanas again. And then more water. By this point I was rather insanely full of liquid, and the taste of the concoction wasn’t really doing it for me. It took a lot of inner cajoling to down the drink, with a lot of fevered self talk that the process would soon start happening.

Christina from California (well, Florida) was first to make the move. I never ever thought I would be in the circumstance where I would applaud someone going off to take a shit, but I was clapping away, elated that her rectum was ready. I was six glasses deep and praying for my canal to come to the party, when all of a sudden I felt the pressure build and I was away.

We won’t go into exactly what happened in there; even after all of today’s toilet talk, I feel it may be a bit too much to enlighten you on such going ons. But once that bout was bestrewed, I had to go right back up and continue with the cleanse.

You see, you go through several stages. From solid stools to black matter to yellow mush, only at the end when your excretion runs clear. So just because you do discharge, doesn’t necessarily mean the cleanse is complete. And there is a lot of inspecting stools to identify what stage you are at, with a debrief with Manoj at every return to ascertain how much more you’ve got to go (“Still some yellow? No, you need to do more.” To which I replied with a hearty, “fuck”) (as in the verbal word; I’m very aware of possible misconceptions today). Plus, you have to be careful not to strain; I was very cautious of the possibility of popping out any haemorrhoids.

I was fairly fortunate; at the end of my 19th glass of the bogging bevy (and these are 300ml tankards, slightly smaller than your regular can of coke), I was clear as can be and allowed to retire to my room. The others were at different phases; Christina too, crystal; Vanessa on her way out; Beavs at the latter end of the spectrum and poor Dylan a no flow on his 22nd glass.

After an hour of relax and recline (“But do not fall asleep!”) we gathered for some sustenance. Again, all that was allowed was kitchari, bland and boring and what was best. From there I fell asleep for almost three hours, before arising to analyse our experiences altogether.

Apparently the benefits are best felt in another two to three weeks. And you’re meant to feel euphoric. I guess in hindsight, it wasn’t so bad and I do feel pretty clear. Plus my liver is toned, in a few days my immune system shall be strengthened and there is – literally – no crap swirling about inside of me.

But I know I will never be able to look at shells on a beach in the same way again.