Feeling: BRUXELLES (and Belgium, and Europe as a whole, really). 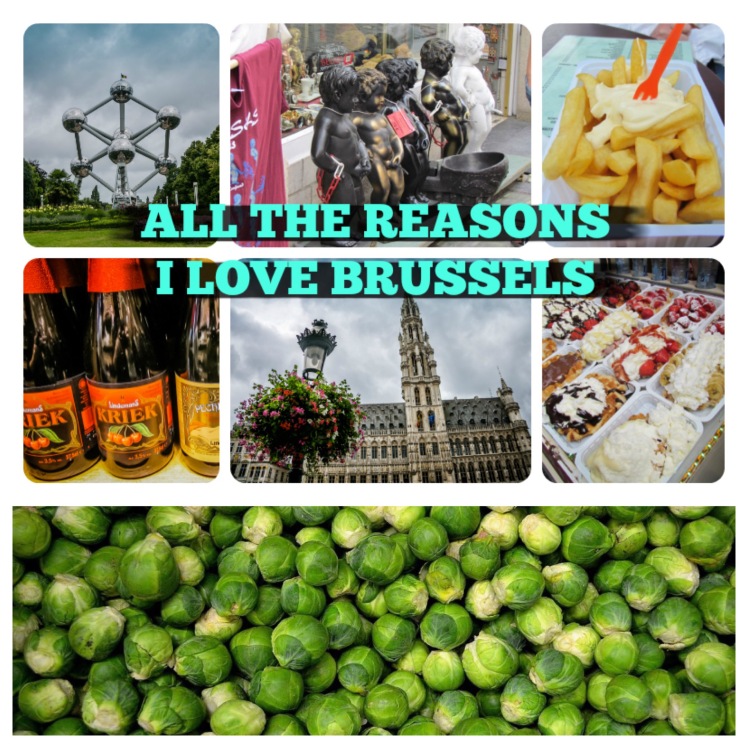 So. Why Brussels is the best. (Because I'm absolutely infatuated with the place).

My word (sorry), the eclectic mix of sexy French merged with some Dutch absurdity and scattering of English phrasing through it – it's just sensational. The "bonjours" seem so at odds with the German-esque flags fluttering about. I find myself in delight whenever I'm addressed in full-on French mode (I tell myself it's because I just look like I belong as a Brusselenean).

You see, in Belgium there are three main languages spoken: Dutch – the main – French – about 40 per cent of the pop – and German – more minority areas. It's broken into Flemish and Brabantian and unique Belgicisms and such, but we won't get into all that. All we will say is that it's so quirky and idiosyncratic and just so Belg.

2. The people. There's such an array of different cultures all living in (what seems to be) harmony about the city centre. And they're all so cool. They're all so disinterested in you, looking through you like you're not even there; and rather than that upset me like I'm invisible, I find I adore it. They all seem so detached and bored and blase, just self absorption at its finest (I really need to work on my own of this if I want to fully fit in – my eagerness and enthusiasm and exuberance is way too at odds with the ways).

Plus the girls just rock what works. There's no single sense of what constitutes fashion; more so, girls that have a big bum dress for so, while the apple shapes adorn to emphasise their little waists and the columns belabour their linearity. Everyone seems so self assured in their own skin as they munch their frites and waffles. It's like a gulp of the wholesome oxygen.

3. Speaking of scents and such; the whole place is permeated with the aroma of waffles. How could you ever be sad in a place that smells of sweet baking bread and sugar and cream and chocolate and hundreds and thousands? (I don't actually know if hundreds and thousands do emit a fragrance, but if they did it would be here). (And ok, I'll admit; there a couple of areas that do smell of urine. A very few. For the most part it's pastry and lollies and sunshine and rainbows). 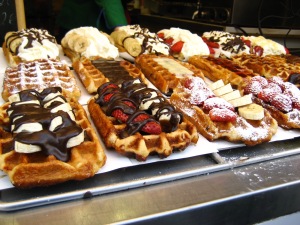 4. Brussels has Primark. And an abundance of H&Ms. I mean, isn't that just encapsulating what constitutes modern European culture? (I actually went to the sweet P and about three H&Ms yesterday and greatly treated myself while The Pedaller was out on a long ride. Plus went to a number of shoe shops and ended up home with two new pairs of sensational stacked sandals. I don't know how on earth I'll get this haul home. Thinking the whole hide-items-in-boyfriend's-bag trick, though I don't know how I'll keep his attention from finding ten new tops folded up his t-shirts. Oh well, at least I have garments to pair with my 13 pants). (18 now; upon them leaving Danish Marie and Christina from California gave me some of theirs as well. Shit. I have accumulated quite the abundance).

5. The infamous Manneken Pis. That being a small statue of a boy taking a widdle. A stream of the stuff flows out the end of his concrete pecker on a city centre corner. And my name is even in his – mANNEKEN. I mean come on. Plus statues and key rings and postcards and all sorts of memorabla depicting him are sold everywhere.

And there is a statue of a dog taking wazz on a side street pole. I found it quite by chance on one of my wanderings, only to come across it on Google later on informing me it is a talking point named the Zinneke Pis. (Google also told me people generally spend about 45 minutes here. I don't know what on earth they do; I mean, I got a few shots of him myself and stood astride before moving along, and that took me all of three-and-a-half minutes). 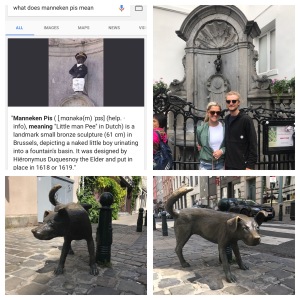 When erections (apologies) of such are a place's main landmarks and talking points, you know you're in a good locale.

6. This one relates to all of Europe and not just Brussels or Belgium. The sense of what The Pedaller explained to me, how the people truly Work To Live, not Live To Work. Things like the post office closing up for an hour each afternoon so the workers can go home for lunch with loved ones, and how the banks are only open until 12.30pm, and how – as we found out today on a mission back to Primark – shops are only open one Sunday a month (that being the first), with the other three closed so people spend time with family.

I love it. The Euros have it the right way around.

7. Convenience. It's just fabulous. Small things, like the packets of ready seasoned pomme de terres available at all supermarkets (ideal for myself). And condom dispenser machines chilling on building sides. Courtesy and consideration completely.

8. The eftpos machines. Don't ask me why (well, I'll tell you anyway), but I love them. They're just so easy and functional and – above all – fast. Fantastic. (You know when you love something so much that suddenly everything about that thing enchants you? Well, yes).

9. Brussels has an exceptionally well stocked and systematic Primark.

10. Last night The Pedaller and I stumbled upon (ok, we purposefully went in search of) The Best Fish And Chip Shop In The World (well, it's actually called Bia Mara but they should seriously consider a rechristen). It was incredible; we absolutely frothed over the panko crumbed hake (his) and hot ink squid (mine) and potato wedge frites (his, but even I hoed into my fair share). Seriously. If you're ever in Bruxelles, GO HERE.

11. This is rather random, but the ambulance sirens. They seriously sound like a warbling shriek of a ghost as they rush through the rues. It's utterly endearing.

12. Phrasing. When people are in customer service jobs and thus actually need to acknowledge you, they are super lovely. And how they word just makes me joyous; upon departing Del Haize (local supo) today the deep-voiced-so-at-odds-with-his-small-size-lad cheeried is with, "Nice Sunday". As in wishing us one. It warmed me.

13. I love how talented singers and instrument players and artists just pull up a pew of parade and start playing/performing/painting. Like the trio of violinists today at lunchtime or the accordion man outside the square or the quartet with the saxophone and drum and trumpet and other-instrument-I-can't-remember-slash-don't-know-what-it-was last night who had a number of passer-bys up and dancing. In NZ should such someones start a sudden showing, they would likely be scoffed, ignored or -at best – chucked 50 cents. But here people admire and applaud and appreciate. It's so endearing.

14. Brussels still has the whole all-you-can-eat-in Pizza Hutts here. I still maintain NZ ridding of them was one of the worst decisions of any franchise.

15. The amazing array of keyrings. If you've read my yarns for away, you'll be well clued on how I'm quite partial to an attachable trinket. The Pedaller bought me the below pictured one today (it was only after I chose it that I realised it looks like a knob). And I purchased one of the mANNEKEn pis last night.

16. Did I mention Bruxelles has the very best Primark?

(And to clarify; Brussel sprouts really do originate from Brussels, first recordings saying such as far back as 1200).

Got to go. Am going to whirl The Pedaller through some yoga.