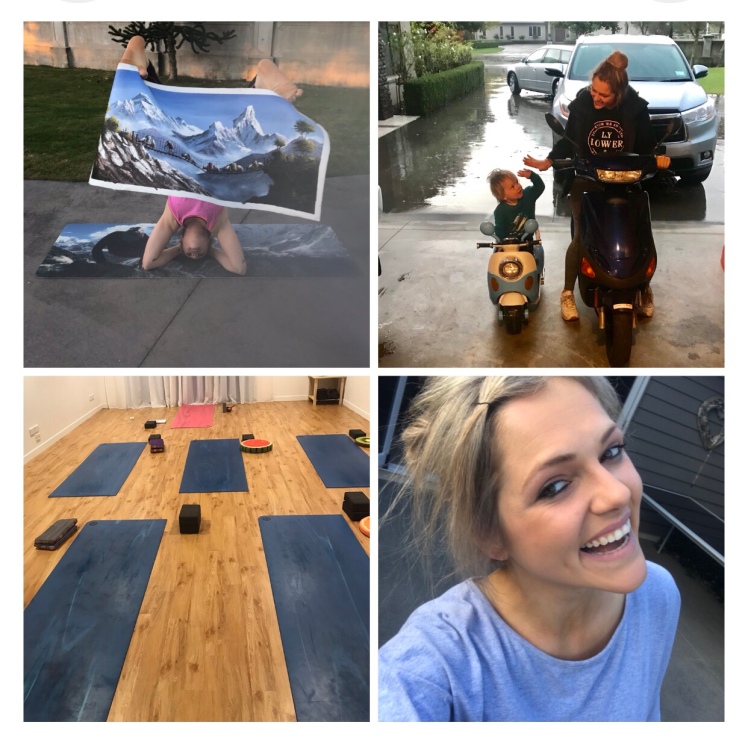 Well hidey-doodey – how the fuck is it June?

Quite easily, I guess. My word, life is busy! Teaching between nine and 13 yoga classes a week, managing a couple of freelancing contracts – Write On, still the ultimate pun lover and opportunist – scoping out couples for the 2018/2019 wedding season and rocking the retail a good 20 plus hours every seven days has me quite clearly see how we are here already.

Well, you pretty much just got one above, didn’t you?

It’s pretty incredible really – I’m literally doing all the stuff I aimed to be doing. Having three businesses myself that are growing like a Kombucha bug dosed in sugared up tea has me happyhappyhappy – though hurling through my daily schedule like a hurricane on acid is a pretty frequent side effect (note: I am not on acid, let’s clarify that. Purely running on mandarins – yes, the palms, soles, knees and elbows are taking on an orange hue again from betacarotene overload – and the aforemtnioned kombucha). Oh yes, and I’ve gone back blonde.

(Something to laugh a little about: one of my regular writing jobs is for a collective called Love Cambridge. Whoever would have imagined that my 16-year-old self, full of loathing for the town, would end up writing on a weekly basis how great it is?).

Plus, I did something super adult and GOT A CAR. The scooter just wasn’t doing it come winter and 6am yoga classes, so I had The Pedaller hot on the Trade Me account and we managed to hustle a pretty pristine Audi. I have christened her Gemmy (silver like a gemstone, and because she was a gem of a find). Now I have four wheels I don’t know how on the globe I managed without them for so long (well, by using Mummy Deb’s Rav 4 on the very often occasion but we’ve moved past that now). And being a station wagon, the boot is my roaming yoga station full of mats, blocks, straps and bags (not plastic, mind).

I also purchased a brand new Macbook. I’m sorry, but HOW was I managing with the second-hand Toshiba for so long? It was probably about the size of myself and weighed about double, and had to be plugged in in order to turn on. I know I’m trying to be zen and not have to have the top-of-the-line anything, but how good is one that’s actually portable and fits a pretty purple case?

And the nephew Hendrik is the best thing in my world. 22 months tomorrow, he is the light of my life. I would put anything aside to spend ten minutes with him. He has taken to call me “A Pop Pop” and whenever we go for a ride in Gemmy we have a competition to see who can yell, “A Pop Pop’s car!” the loudest. I know I’m biased, but that kid is sunshine.

So 2018 was set as my year to settle a bit. Stay the entirety here (aside from the Aussie flit), get the businesses going, be a little more future-focused.

Last Friday I booked a flight to Nepal.

Well, my pal Craig booked it for me. He was one of the tribe who I did Everest Base Camp with last year, and he’s been trying to convince me to go back with him for the last six months. But work/house sitting commitments/money has always been a barrier, my reasoning as to saying no.

Then last week himself and myself climbed a bit of a mountain and he asked again.

Fuck it, I thought.

And the tickets were booked 24 hours later.

Just a two-and-a-half week go at it, mind. Flying to Kathmandu and then rather than fly to Lukla, we are going to do the six-day (though we’ll smash it in five) trek there. Then carry on up to magical Namche Bazaar, my favourite place IN THE WORLD ™, to pretend we’re locals as we sink Donkey Piss shots in the Irish bar and visit my Tibetan bestie in her little selling store.

Life is good. Work is good, The Pedaller is good, the future looks good. Anytime I start to get worked up or the nerves start frissoning I take a little pause and look around.

Because it really, truly is.

(Well, aside from an issue that occurred yesterday. With the old passport due to expire in December, you can’t travel anywhere bar Australia six months within – so a renewal was required.

Below is the photo I sent in. Below that is that passport image that was sent back to me.

I’m sorry, but when did I acquire a deformed growth on the side of my face?

What has happened is that little strand of hair poking out the side – always messy, can guarantee – has not been image cut, instead latching on as part of my ear.

I called the PP office and was told my only option was to order a new one, or grit my teeth and bear it. I was not overly chuffed with such a response – I mean, there are so many boxes to tick to get a green-light passport pic, how can they turn around and say my malformed face will do? – but my follow-up, carefully worded email (yes, I’m that girl) has gone unresponded so it appears I will be heading to Nepal looking like I yield from Middle Earth.

No matter. Good talking point with the customs people.

If they let me in without a signed letter stating my face has changed from surgery, that is).