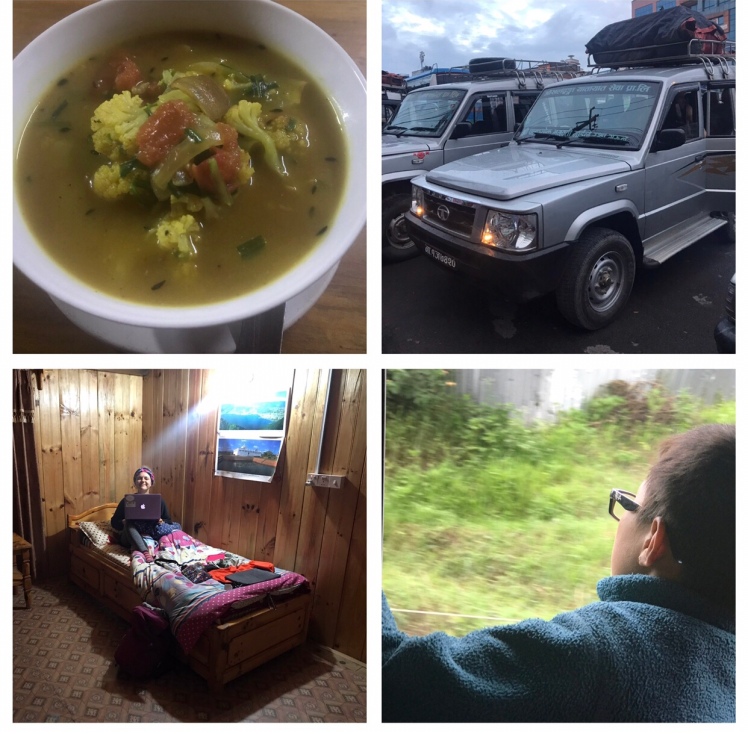 So today marked our 11-hour drive from Thamel through to Phaplu. Prem hustled us the local price, so it cost a grand total of USD$16 per person for the journey (I know; what on earth!). Our Jeep arrived to pick us up at 4.25am – nice and early, and prompting me to speed wee.

We stopped off about 17 times to pick up about 26 different people, ending up – after a few chops and changes – with ten of us including the driver. Four across the back seat, Craig, I and a mother and son in the middle, then the driver and an absolutely stunning Nepalese girl in the front.

Cramped? You’d think so. I’d be more prone to saying it was just quite cosy.

One of my best friends Rene did the drive on a bus about 20 years ago. When I told her I was this time instead of flying in, she exclaimed out and said, “It was the most awful thing I’ve ever done! I thought I was going to die”.

Suffice to say I haven’t – died that is – but there were a few moments I did think we may topple off the cliff side. I’m extremely happy Mummy Deb nor The Pedaller were aware of what exactly the trip entailed.

If you haven’t experienced driving in an Eastern country, it’s pretty haphazard to say the least. And up into the mountains was even more so. Lots of overtaking on narrow corners, tooting (more a case of, “Hello I’m here!” rather than, “Get the fuck out of my way” though), herds of goats and cows and chickens and dogs (there were countless occasions where we literally stopped for a chicken to cross the road), potholes upon potholes filled with muddy water. Driving up up up the zig zag roads until we were literally amongst the clouds. It was hot, it was humid, it was spasmodic and jerky and jolting.

I loved every single second.

I don’t know what’s happened to my fear – it’s like every inkling has dispersed from me. In day to day life I stress and worry about stupid little scenario sort of things, but in situations where there is actual danger, I just feel thrilled.

I developed a little love for the sweet little boy squished up against us. Only about six or seven or so, he spent the entirety of the journey either asleep with his face smashed up in a crevice created by the in-front seat, or gazing out the window in absolute wonder, taking it all in through his little Ray Ban specs. The only point he made a peep was on a particularly windy bit of road, where he vomited all down the side of the door; I was at the rescue with a brand new pack of wet wipes at the ready (Craig and I had had a happy debate at the supermarket the night before – he wanted to go for the cucumber, while I was all up for the strawberry scented. Of course, the latter was purchased). (Just realised the mum of the young lad didn’t return my packet! Darn it).

By the end of the journey we were pretty pally with the other nine in the Jeep (apart from the mum thief – she was quite standoffish and snooty, come to think). We waved goodbyes and our lovely driver lad dropped us at the door of The Everest Hotel, our first location of lodging as we head up the hills.

We’ve now frothed over our twin share (a little wooden rimmed room), downed some dinner (cauliflower curry for me, dal bhat for Craig) and are taking some time to chill before an early exit to sleep.

Just a few points of note from today:

1. Driving along and Craig asked me a question; it struck me he didn’t interrupt my thoughts.

Often I ask The Pedaller what he’s thinking and he’ll reply, “Nothing”. And I just cannot fathom it – “How can you be thinking about NOTHING!” I always say. “How on earth is your mind not milling with a million thoughts!”

But this morning I realised my mind was fully empty. Empty. Empty. (And not because it was before the crack of dawn).

Now that’s a beautiful and scarce thought in itself – and the only one at once.

2. I love love LOVE not having my phone. You see so much more. The full 11 hours (when I wasn’t asleep on my lap), Craig and I were in absolute awe of the surrounds. Now and again I’d take a photo, but for the most part I stayed present in the moment and not from behind a screen, and it made such a difference to the experience.

And I was in so much more tune with stimuli. Things that would usually completely pass me by. I realised I love the sensation of the wind through the window fluttering my eyelashes. Just how much I adore feeling my bare feet on the earth. Simple, simple things that when you take note of are actually so significant.

3. As we drove along I smiled at all the people on the side of the streets. How beautiful is it when it gets recognised and reflected back to you? The elusive “they” say a smile speaks a thousand words, but I see one – love. A smile is universal – and so, as it happens, are the Vengaboys (next point).

4. The driver was pumping some super good tunes. A bit of Nepali rap, some melodic, well, melodies, some nightclub numbers. And at about 3pm, a Vengaboys song suddenly came on – to which the whole carload sung along to. 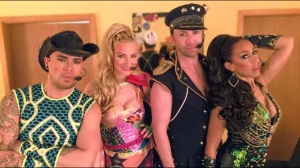 Note: above pic is of the aforementioned, not our carload. Though one of the girls definitely had a similar outfit.

I love the way my brain is working. The introspectiveness and insight to myself. I love it here in my happy place and how much more me I feel I am.

There’s so much more to life than earning as much as you can to sit in an account or be invested into a house. Don’t get me wrong –

I applaud homeowners and people with successful careers. But the main reason of being is to be happy and feel love for life. If you aren’t and don’t and can see no brightness shining through, you need to change tact and make it so you feel alive as life should be.

Does that make sense? Maybe the journey in the Jeep has left me talking shit. (Even more so than usual).

Tomorrow we start to trek. Going to try and cover about 20km of Nepali flat (i.e. up and down) to the next teahouse. Just Craig, me and our plastic-sleeve encased map.

What could be more magical? 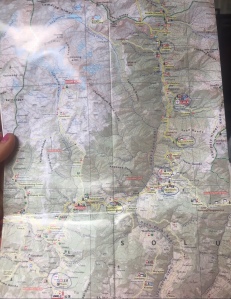