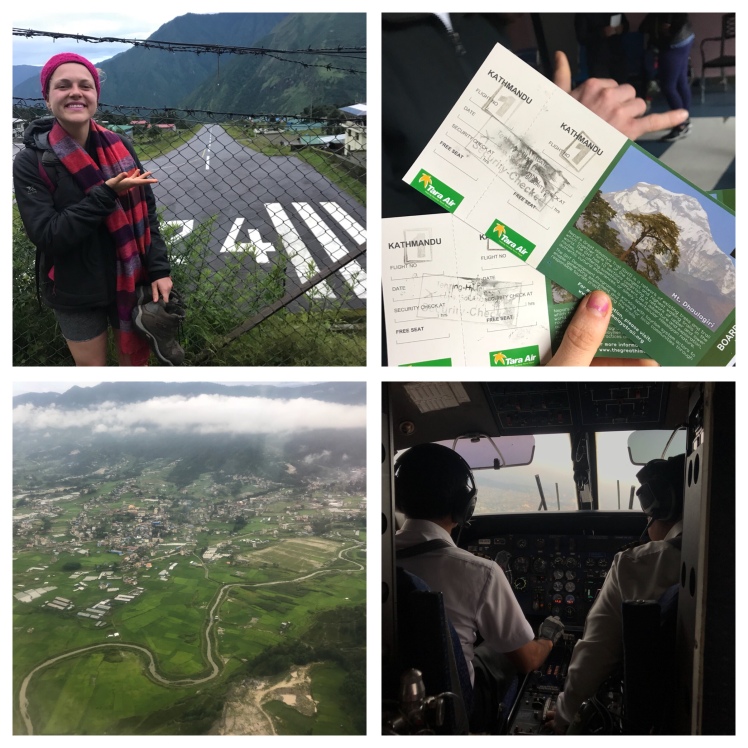 I had made Carig set multiple alarms – he was firm on no more than three, under the promise that if we dozed through he would be forking our for a helicopter to get us back.

You see, flights to and from Lukla airport are fickle. Any clouds misconstruing the clarity and they’re all off. The first time I did EBC, our first day was canned and we were lucky to lift off on the second; we’d heard throughout the past week a fair few days had been no-fly (two guys in our lodge last night had been grounded for three days). However, depending on the airline you go with you get priority, so we made sure to book with Tara Air who always fly first.

You see, the Lukla airport runway is a 10th of a normal sized one. And it ends on big brick bank in front of a cliff face. So even though it’s annoying when flights get the no-go, you can most definitely understand why.

Last night in the Everest Coffee Cafe a programme came on National Geographic about the most dangerous runways on the world. Lukla was number two (a change from its usual number one; think it was surpassed for the first time by one in Afghanistan because of shooting security). The show showed a plane in 2010 that hadn’t halted in time and had hurled into the brick wall (that was heartening) before explaining how because of the air pressure, the pilot must approach at a speed surplus to comfortability, and break with full force upon touchdown on the slanted-up tarmac.

But getting out is far less fearing than coming in – plus this will be my 5th time, so I’m a bit of a veteran.

Carig and I were the first in the airport, even before any staff. If I think Kathmandu Airport is rather rudimentary, it looks supremely systematic compared to Tenzing Hillary here. Security was a mere pat down and ask if you were carrying any items of illicitness, then it was through to gather at the gate.

It’s hilarious; you’re sitting there at 6am, which is when the first flight in from Kathmandu takes off. As soon as it lands in Lukla 45 minutes later, it’s, “Go go go go!” like an ambush approach onto the plane. I was just sitting there in bittersweet sadness that the smoking room of the teahouse has been shut down since last time (we had a celebratory cigar – the only time I allow anything other than air into my lungs) when the hum of a plane approached purred out and it was our turn to passenger.

Quite cool: usually the route is overrun with tourists; this trip, being off-season, it’s literally all locals par Carig and I and a couple from California.

First time I flew this flight, I was rather rocked when I saw the pilot wiping down his windscreen with a tea towel. Got to note that it seems nothing much has progressed in the process of preparation; the ground crew were all in jandals, we were all hanging out on the side of the runway, some of the staff were having a cigarette as they packed and petroleumed.

Pop Wort being Pop Wort, I was first in line so Carig and I got the two seats right behind the cockpit. And I mean right behind – if I reached out, I could’ve pressed some bits and bobs on the dashboard. 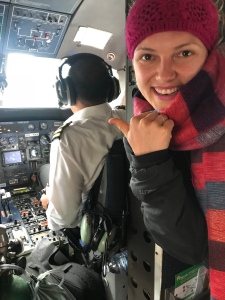 As we landed in Kathmandu I saw the runway as though I would I was the captain; for someone who loves planes as much as me, it was magical.

Insertation: Carig and I were wondering where we look like we come from; before saying a word and hearing accents, if someone saw us where they’d say. I said for him the USA and he surmised me as South Africa. Last night there were two American lads in our lodge who were on our plane today; one asked where we were from and when we replied, he said they’d had it wrong – they’d picked Glasgow for Carig (heard him speak) and Johannesburg for me (obviously didn’t hear the Kiwi till).

Can we just take a moment here to address something I’ve just realised? I feel my contentment and peace of the last few weeks can be illustrated by the fact that I’ve been strutting around in a fanny pack. A fanny pack. And sometimes not even strategically placed to the side over my hip, but centre in full frontal of the, well, fanny.

Whenever I come home I have a bout of time where I continue in the way I’ve been. So all of August should see me cavorting about in Cambridge with my crotchet headband on, fanny pack strapped up, stripy socks with slides, no shower for more than seven days (kidding. Showers start straight away).